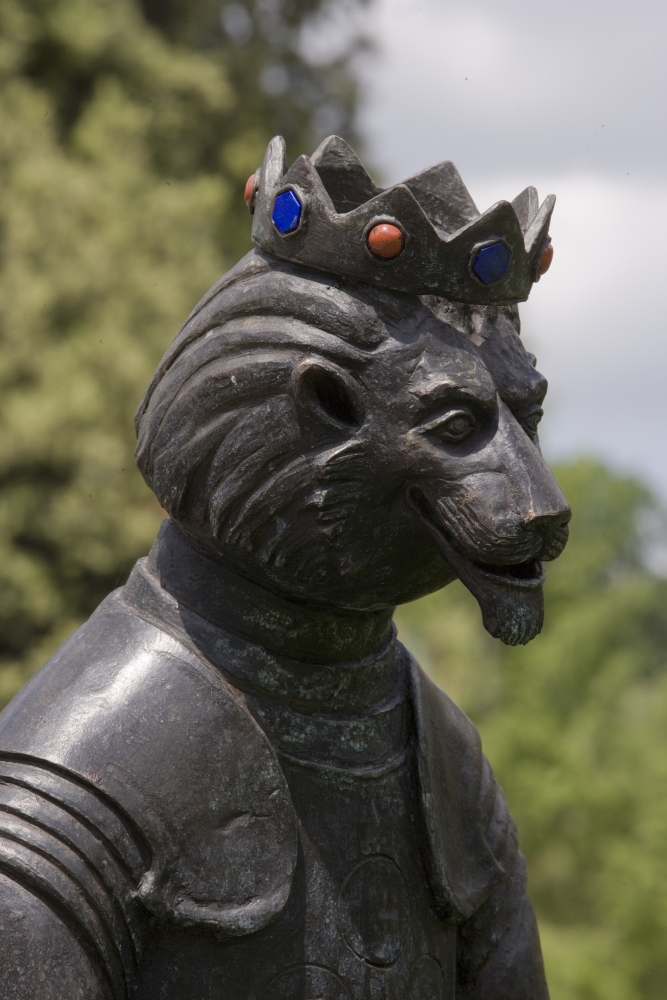 The Majestic Lion
Bronze with jasper and lapis lazuli
Height: 45¼ in. (115 cm)
Edition of 6
Detail

“My work plays between the limits of nature and culture,” says sculptor Bjørn Okholm Skaarup. “The animals are thoroughly ‘culturalized’—they represent human allegories or use manmade tools.”

Okholm Skaarup has created a contemporary bestiary, or classical book of animals, in bronze.  Each sculpture presents a whimsical story or allegory to decipher, with sources ranging from ancient fables and art history to music and modern animation. The Majestic Lion, traditional king of the animals, wears the crown and armor of a great monarch in the style of Medici court sculptor Giambologna, yet he sits astride a rocking horse, a reference to his fleeting and jovial power. Frogs reenact Homeric battles in the Batrachomyomachia, while mice peer through spectacles and listen at telephones as The Five Senses. A cheetah rides a scooter to move faster, a giraffe stands on stilts to reach higher, and a kangaroo bounces on a pogo stick—a “kængurustylte”  in Okholm Skaarup’s native Danish.

From 1994-2004, Okholm Skaarup was an artist at the Danish National Museum, Copenhagen, before moving to Florence and receiving a PhD from the European University Institute in 2009. While in Florence, he studied the work of Renaissance sculptors Donatello, Michelangelo, and Giambologna, learning the vanishing art of large-scale bronze casting.

“I am constantly trying to improve my skills in modeling, and see how far the medium can go,” Okholm Skaarup explains. “How many fun details you can add, how many forms you can create—ideally large, heavy forms that rest on light foundations, so the work appears as vibrant as possible. With bronze, you can make the most dynamic shapes imaginable.”

The bronze form of a capricorn, clinging to a mountaintop as it is being lifted into the air, is just such a tour de force of contemporary bronze working. In a post-cataclysmic world, flooded by ever-rising oceans, the capricorn takes refuge on the highest mountain peak, only to be rescued by a hardy rat piloting a zeppelin and bringing it to safety.

In Okholm Skaarup’s intricately polychrome work, he explores the voluminous form of a tutu and leotard-clad hippo, which at once references Degas’s Little Dancer of Fourteen Years and Walt Disney’s Fantasia. Or another hippo, sprawled in the pose of Ingres’s Grande Odalisque, or even a Dinosaur paleontologist, mystified to discover the Flintstones’ Flintmobile among the rubble.

Okholm Skaarup’s indoor and outdoor sculptures have been the subject of museum exhibitions throughout the world, including the Koldinghus Museum, Kolding, Denmark; the Museo Cenacolo di Ognissanti and Four Seasons Hotel, Florence; and Hotel Cipriani, Venice. In 2015, the Collectivité of St. Barth publically displayed a suite of sculptures throughout the island.  In 2016, The Bruce Museum, Greenwich, Connecticut organized a solo exhibition of Okholm Skaarup’s work, and the following year, his monumetal sculpture, Hippo Ballerina, was exhibited at 64th Street and Broadway, opposite Lincoln Center.

Bjørn Okholm Skaarup lives and works in New York City. He is a member of the Royal British Society of Sculptors.

The animals are thoroughly ‘culturalized’—they represent human allegories or use manmade tools.

The Majestic Lion
Bronze with jasper and lapis lazuli
Height: 45¼ in. (115 cm)
Edition of 6

Capricorn—After the Flood
Patinated bronze
Height: 63 in. (160 cm)
Edition of 6

Hippo Columbine
Bronze with polychrome patina and cloth
Height: 37¼ in. (96 cm)
Edition of 6